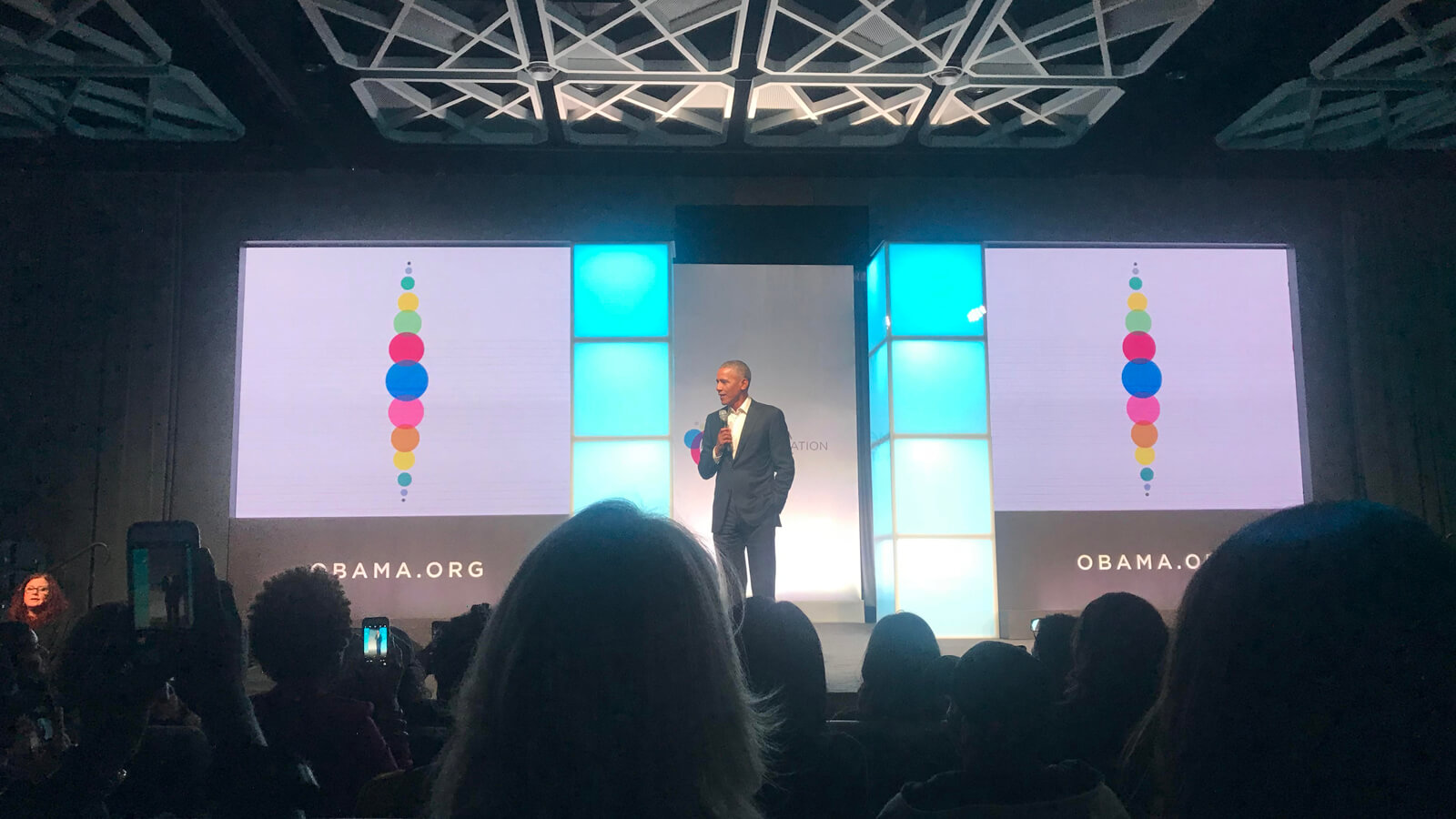 The 44th US President Barack Obama himself, attending for full two days in the Summit

October 2017: The Obama Foundation Summit… and the Future

The end of October 2017 was the highlight of my journey this year. I was invited to the Obama Foundation Summit, worked with a team of the Summit to feature a profile video of my past work through the OTP foundation, and got connected with numerous amazing civic leaders from all over the world.

Below is the recap of what happened in the summit:

Day Zero: A Discovery of Humility

It was a networking day, pretty much – filled with getting to know people and catching up with the people who we we had connected to prior to the Summit. In short, you feel small. You feel humbled. Every attribute that I have feels super small, compared to what other people do. There’s a Jordanian who distributes comics to redefine heroism in order to combat terrorism. There’s a Croatian guy who constantly innovates in the political and economic impact sphere. There’s a Peruvian lady who educates, empowers and connects individuals in the civic engagement space. There’s a Saudi lady who champions gender equality and freedom of choice. And there are so many more. It was overwhelmingly positive. One thing that I also discovered was that INSEAD is present, everywhere. I met an alumna from Vietnam who is an entrepreneur in the education space, working with young children!

Day 1 of #ObamaSummit 2017 was filled with hope in numerous areas through numerous exchanges and sessions. First of all, it was a true honor to be able to have Indonesia mentioned in the Opening Ceremony video – there is a feature video on OTP Foundation and INSEAD, also the interview section was done in Kellogg! It was a great exchange through numerous connections, sharing about what I am doing at INSEAD and at the OTP foundation – as well as listening to other great stories.

The sessions on this day covered a variety of inspirations, from the Opening Ceremony with Former President Barack Obama and Former First Lady Michele Obama, keynote speakers, breakout sessions, Prince Harry’s session, and a Community Dinner.

What inspired me the most about this day is the Community Dinner. Collaborating with an organisation called “The People’s Supper”, the Summit made us meet random individuals and share our life stories and explore how to build better communities. The People’s Supper had arranged numerous dinners among different communities to bridge and empower us despite our differences, through guided and non-guided conversations over the dinners. It simply meant that a lot of conflicts and differences can be understood if only we talk about it, and that is a beautiful process to increase each other’s mutual understanding.

Top three quotes of the day for our soul:

“Democracy is a farm where you reap and sow, not a supermarket where you come and pick.”

“Offer handshakes, not clicks and likes.”

“Validate, and show up.”

Day 2: The Future is Coming

There is one question that strikes me deeply: “What are you prepared to do today, so that 50 years from now the world looks different?”

And through the sessions of this day – an optional Yoga session (2nd time in my life LOL), Business & Society, Foundation Design Breakout sessions, a marathon of speakers in the closing session, and a community concert (and a great last night with many attendees!) – there were several key themes that I thought are embodied within these quotes:

The Wisdom of Michelle Obama: Skepticism, Disagreements, Voice, Treatments and Love Thy Self.

“Don’t enjoy the highs too much, don’t wallow in the lows too much. It takes skepticism to stay in balance.”

“Be productive in disagreements. A lot of people take for granted that having a voice just happens.”

“Finding a voice does not happen overnight. Make them speak - it takes practice to find a voice.”

“Treat one another as decent human beings.”

“Value yourself to care about yourself. We are worthy. It’s the demon that stops us from taking care of ourselves.”

“Did you say yes to everybody else first?”

“We are not ruthless about ourselves.”

“I have to plan my happiness. You got to work some happiness.”

“In this year, when am I gonna laugh? Smell the roses? Because if you don’t, the work - the need - the agenda will still be there.”

ON CHANGE AND HOPE

“Hope is right in this room. Your voices. Your missions. The possibilities.”

“It was the young citizens who live the idea of how the world can be better.”

“Change only happens when people engage one another as individuals and bring it as collective happens.”

“Hope is our weapon. Media is our tool. Action is the remedy.”

“Your hope is your superpower. Don’t let anyone makes you feel hopeless. Hope does not mean tomorrow things are gonna be better. Hope comes in handy when you put things and it hasn’t worked week after that.”

On Citizenship and Business

“Citizenship isn’t just about your rights, it is about our responsibility to each other, in a community.”

“The responsibility that we have as market makers is to dignify work.”

On Power and Privilege

“I invite you to take inventory of your power and privilege.”

“Who was the hero that gives you the permission?”

“When did you recognize that your voice deserves to be heard?”

“Charity has been about the redemption of the donator and not the liberation of the receiver... and we need to change that.”

“You have a dollar to spend, you can change something.”

“There is nothing more dangerous than a human who is hopeless.”

“The currency of this generation is talent.”

“Nothing can be more powerful than a committed group, no matter its size.”

“We can all hug someone - the people we serve - and you should not doubt the power of this - the power of proximity.”

“There’s power in proximity. Get close to the people who are suffering.” “The highest office of the land is not that of the President.

The highest office of the land is that of the citizen. It is you.”

“Success at this point is less about your career plan. It’s about your fire. Our fire. Make our fire. Start cooking.”

“You are right there, ready and able, to change the world.”

“Most of the people in the room are not inherently better equipped to decide on the world than you are.”

“You will represent those voices. Keep believing in the power of other people and work with them.”

And finally: One thing that President Obama emphasised: No-selfies!

Selfies have become so popular, to the point that a no-selfie policy must be emphasised. Truth be told, it is so much more than that. The rule was simple: no selfie with Former President Obama because he wanted to talk with us, and not be an object of fame.  The summit was about making true connections. It was about realizing that all of us are like him – a figure of change. It was about us, and not about being consumed by technology – instead, let's use technology to empower others.

There was a quote on this day that I think sums this up: “We think what is right, but we have to ask and listen.”

The Obama Summit was a crazy ride, and I am very thankful to everything that has happened during my INSEAD year. All the growth was just unbelievable. It might be painful, but it makes me grow as a person. I am ready for the future to make me grow even more.

But what future am I talking about? :P

In October 2017, I was at a very serious crossroad. My most aspired industry where I wanted to go to was taken away – the opportunity was gone, as all my interviews with that particular industry did not work out. There are a few others that I am really looking forward to, but it seemed like I had been building my profile focusing only on this industry.

But I was grateful. As a wise friend of mine said, “Bryan, don’t be too disheartened. Think of the interview process as a process where you seek wisdom from the wise men. The wise men have spoken, and it is likely that they are doing you a favour.”

That changed my perspective, and that leads me to my November experience in fully deciding – on who do I want to be.

Changing Lives, One House At a Time
MBA
Read the blog