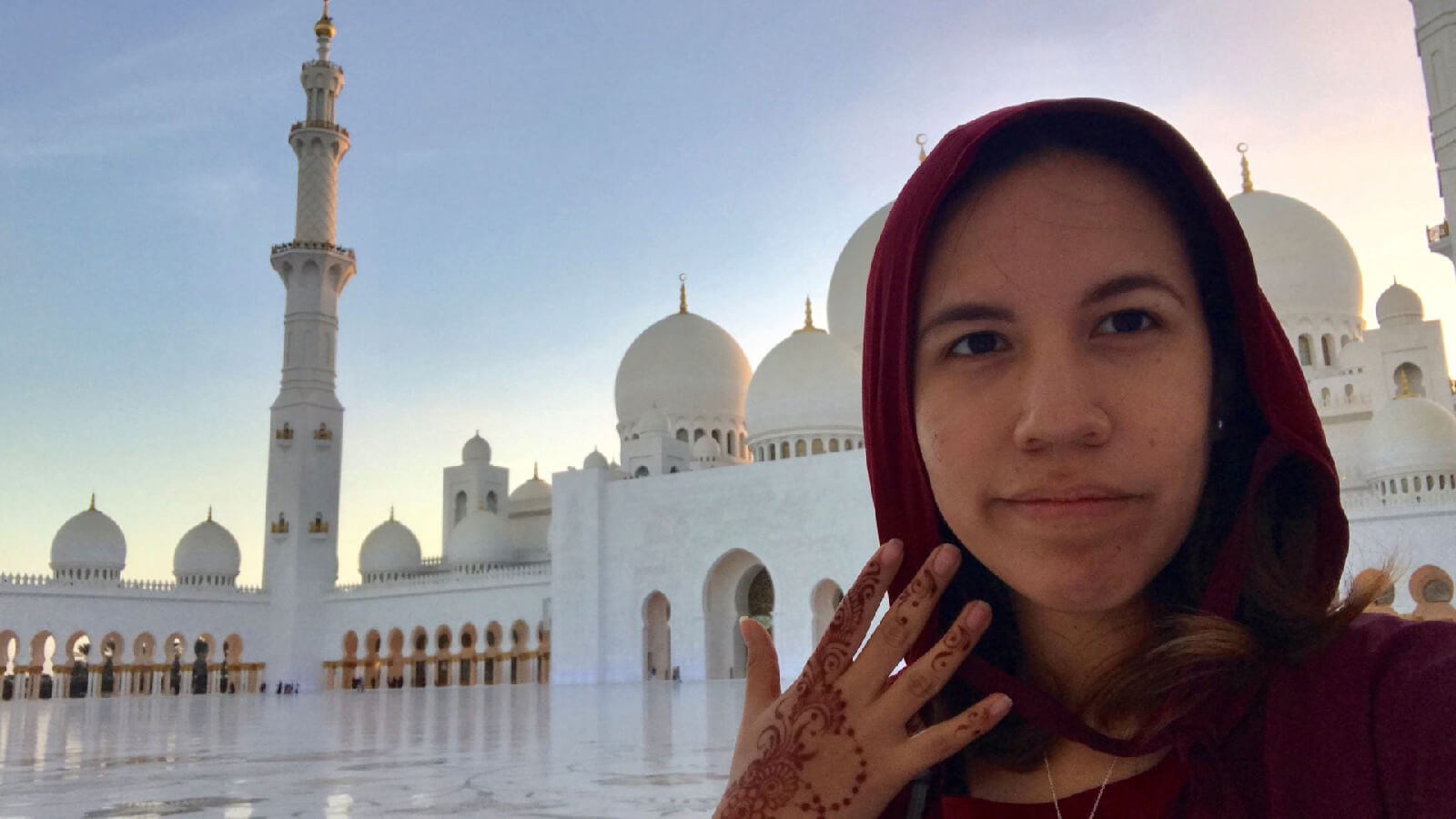 Visit to the Mosque

A good Egyptian friend once told me, if you want to learn how to build cities from scratch, go to the UAE. Having spent the last two months in the Abu Dhabi campus, I couldn’t agree more.

Geographically, the United Arab Emirates (UAE) might be as far as possible from Peru and I had previously never set foot in the MENA region (Middle East and Northern Africa). The possibility of spending a period there (January and February) seemed like the right opportunity to explore.

While I have travelled to countries where the culture is very distant to mine, my usual approach was to take things as they come and reach some understanding in the midpoint of my stay there. This was not the case with my Abu Dhabi experience, because as soon as we stepped onto campus, we were given some guidance through the course “Doing Business in the Middle East” (DBiME). We learned the basic theoretical knowledge (political environment, demographics and economic factors) in the classroom but also had some visits to some iconic companies (Mubadala, Siemens, Cleveland Clinics, etc.) that explained the way they worked. This was a great start to my immersion into the Arab world and while

One of my goals coming into INSEAD was to expand my understanding of others, and through my interactions with the people, businesses and cities within the UAE I feel a lot closer to that than I was before.

This period marked the end of my career exploration days. Coming into INSEAD I had some ideas of what I want to do later on, how I want to pivot my career, but with so many possibilities I struggled to make a decision throughout Period one and two. INSEAD is an intense place and having so many passionate and sometimes even confused students in the same location, makes it a little hard to find one’s own voice and path. Identifying my preferred path might have not been a direct outcome of the Abu Dhabi campus, but I feel that it greatly contributed towards it. Not only were we in closer proximity to a hub city, Dubai, but also, we had some courses (DBiME, and Live Action Project) that could be aligned towards learning more about the space we are interested in. The Live Action Project is a part-time consulting project for which we are assigned a client depending on our topic preferences.

Fun and sense of community

Spending my time between the client’s office, INSEAD’s campus in the financial area and my hotel, brought me back to my consulting days. But this time there was something different, I was no longer alone or with two people in the city, but I had 46 other classmates on this crazy ride with me.

Coming from the Fonty campus, where most of our gatherings include +100 people, being part of a smaller community felt refreshing.

The Abu Dhabi folks are the right combination between career-focused and adventurous individuals with a passion for life. You will find us in the mornings cramming for Pekka’s iconic Advanced Corporate Finance course, preparing client presentations during lunch and planning group outings in Dubai in the afternoon.

A Peruvian national, Anais studied International Business Administration at the Rotterdam School of Management. She speaks five languages, has studied/ worked in eight countries, and used to work as a senior consultant in revenue optimisation projects across the LATAM region. In her free time you will find her trying new food and talking to strangers.