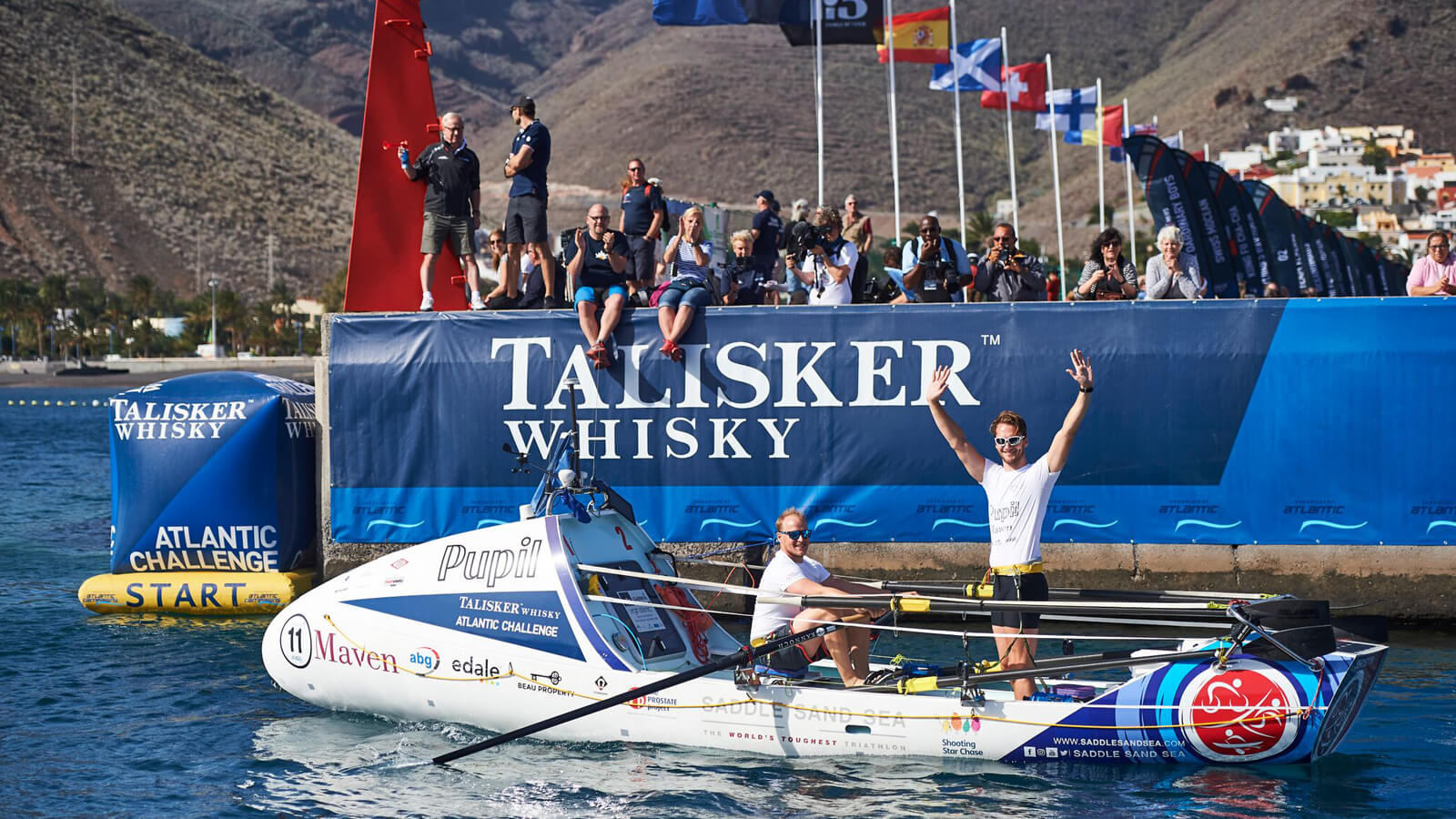 What do a 3,000-mile Atlantic Row and an INSEAD MBA Have in Common?

This is the question I ask myself as, in my last week in my current role as Brand Manager for Diageo-owned Talisker Whisky in Europe, I have the unique experience of managing the start-line of the Talisker Whisky Atlantic Challenge, the 3,000-mile rowing race across the Atlantic Ocean, of which my brand is the title sponsor. I am about to embark on my year’s MBA, starting in Fontainebleau in the class of 18D.

Starting in La Gomera, the Canary Islands, the sponsorship offers me not just an excuse to escape the onset of snow in London mid-way through December, but an opportunity to take a wider perspective on the challenge I myself am about to undertake in studying for an MBA at INSEAD. 27 teams from 17 different countries across the globe have assembled in the tiny port of San Sebastian on the island of La Gomera, from which Christopher Columbus set sail to the Americas over 500 years ago. The Atlantic crossing to Antigua in a rowing boat, using man and mental power alone, has been made by fewer than 500 people, fewer than have been into space. In addition to the race organisers, Atlantic Campaigns, my team has assembled there on the island, a number of agencies managing the PR and content output which raises awareness of the Talisker brand through the sponsorship, whilst supporting the participants in their campaigns to raise money for hundreds of different charities. Almost €1m was raised in the 2016 race, and every one of our team becomes inextricably emotionally involved in the stories of each and every participant.

The first parallel I draw between the Talisker Whisky Atlantic Challenge and INSEAD is the unique situation. This tiny rocky outpost off the coast of Africa endures an annual onslaught of teams, families and supporters from around the world. Like Fontainebleau, a forest in the middle of France, it seems a somewhat unlikely spot for such a rich convergence of individuals. They are two unique environments in which people from different cultures, backgrounds and age groups come together in single-minded pursuit of a shared challenge.

The long-term preparation required to complete such a challenge is immense. The cost of a team’s campaign is equivalent to that of an MBA, and while the entrance requirements are not restrictive in themselves, the compulsory preparatory time on the water, multiple sea-faring qualifications and mental preparation are in some ways comparable to the somewhat lengthy MBA application process, from galvanising the support of families, friends and colleagues to passing the GMAT respectably.

Short-term, as I deal with the necessary ‘life-min’ of accommodation, car, insurance… and struggle to track down the pre-work across a plethora of INSEAD portals, borrowing my cohort’s collated lists to re-assure myself I am not missing things, I watch the final preparations being made in the marina. The rowers are busy at their boats on the pontoon - making sure that they will be as comfortable as possible in their tiny cabins, home for the next 35 to 90 days at sea, and prepared to meet any conditions out on the open ocean. They count rations of dehydrated food, cut out foam seat cushions, and make sure navigation instruments are in good working order. They too borrow ideas from each other, the Egyptian pro-adventure athletes sharing training advice with the four Norwegian girls who are intent on beating the female record, and past rowers return to share their wisdom.

Seamless teamwork is fundamental. Most teams, in making it to the start-line, are already well into their journey. They have long-since made a commitment that they are in this together. The minute one blistered bum leaves the seat at the oars, another must replace it. As the British Olympic rowing team said If one man or woman falls down, their partner or teammates must pick them up again. On the whole, the strengths and responsibilities within the teams have become so engrained that they are unspoken; even a minor dispute amongst a crew concerns the fleet, so important is it that the team members trust each other without limit. My newly acquainted group of five will be thrown together in much more haste, chosen as much for our diversity and potential to clash as our individual and combined strengths. We will have to learn ‘on the oars’ how to work together, and I imagine there will be times when there is the threat of capsize.

For all the power of teamwork, it would be remiss to forget the solos who complete the Talisker Whisky Atlantic Challenge. There are a few even braver than the rest who decide to make the Atlantic crossing themselves, and like them I must acknowledge that INSEAD is a personal challenge as much as a shared experience. While learning to work with others, I must rely on myself and my own sheer determination. Nobody else is going to write my own career path for me. 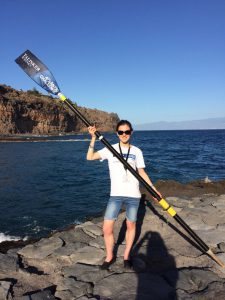 In my current role, it is my job to promote my brand through this sponsorship. I employ multiple agencies in the effort to push stories and content from the race into the global media. The participants themselves are increasingly media savvy and we support and encourage them to use the photography and video content we capture for them in addition to their own, using the appropriate hashtags to promote their team campaigns. Raising sponsorship for their chosen charities is high on the priority list for most, and as a brand we can support them to do this. INSEAD is an incredibly powerful brand, one that, it goes without saying, will expand my external radar and support my short and long-term career prospects immeasurably. More immediately, I am already recognising the importance of the art of self-promotion, or at least engagement with the INSEAD social community, virtually and in person to make sure that I have a seat at the table amongst my cohort.

3,000 miles is a long way, and a year is both a long and a short period of time. The challenges will both require endurance and stamina, as well as more than occasional pushes beyond normal mental and physical limits. While as MBA students we will not be following an eat-sleep-row-repeat routine of two-hours-on-two-hours off, my fellow 18Ds and I will have to adapt to a new schedule and may well at times have sleep patterns down at the two-hour mark. I just hope that we, unlike the rowers, will not get to the point of hallucination!

A sense of humour

It goes without saying that a sense of humour and fun will heighten any experience immeasurably. The rowers compile jokes and playlists of Christmas songs to prepare for the festive season away from loved ones, pack bits of costume with which to celebrate the incoming new year, and at the final night cocktail party we lay on as the sponsor look forward to their next drink at an almighty celebration party on the other side of the Atlantic Ocean. Meanwhile I am liaising with my future chateau-mates who are currently planning the first ‘Fete-a-Fleury’ to bring in the New Year in Fontainebleau. I may not be going to meet the rowers when they arrive in Antigua come January and February next year, but I will spare more than a thought for them as I raise a toast of Talisker Whisky to celebrate Burns Night with my new-found friends in Fontainebleau.

In the meantime, over the Christmas period I shall be finishing the last of my final preparations for Fontainebleau in January, and following the Talisker Whisky Atlantic Challenge on my mobile, you can find out more and follow by downloading the race tracker too at www.taliskerwhiskyatlanticchallenge.com

A Scottish Brit, Sarah graduated with a masters in Chinese from the University of Oxford. She is a keen runner, skier, sailor and loves being in the great outdoors and exploring new parts of the world using her languages and discovering new cultures. Sarah also loves cooking, wine, whisky and cocktail culture.

Change, accelerate, be global and have fun
MBA
Read the blog

864
The Journey Has Already Started
MBA
Read the blog