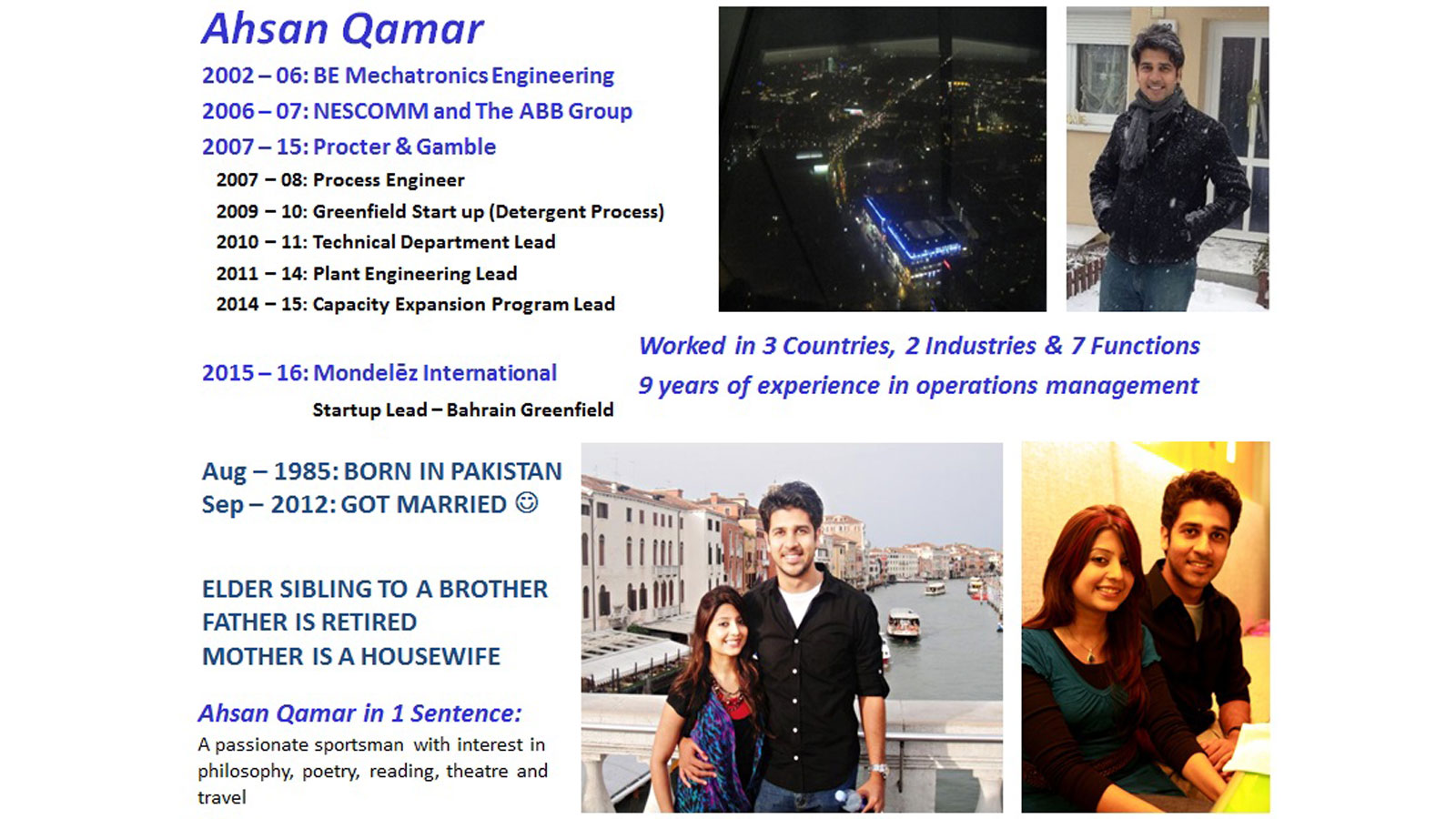 My life in a snapshot!

Why and How Did I Go ALL-IN-SEAD?

Some experiences are life-changing. At times, such experiences can be nothing more than a mere interaction; and even more so, a mere conversation. Walking down my memory lane, I can root my decision of coming to INSEAD to one such conversation. It was June ’14 when I was a bit disappointed with not having been able to see a clear path for my career trajectory leading to general management after having worked with P&G for about six years.

I was having a career coaching discussion with one of my long-trusted mentors and his eventual reply to me was, “Maybe you have become too well settled in and too afraid to change!” That triggered a really deep drive in me to self-reflect and take a deep hard look at what I wanted out of my career and life. I realised that I didn’t just want international exposure or a simple career change. Over the course of the next few months, I laid out a clear 10-year career plan, starting from doing an MBA, via transitioning into strategy consulting and eventually leading towards an executive level position in corporate general management.

Of the business schools which I applied to, I eventually selected INSEAD because:

In Feb ’15, when I was done with GMAT and writing my INSEAD MBA application, my wife and I faced a terrible setback. We had our first son, born pre-term, who spent the next five months in intensive care for newborns. I managed to get my application through to INSEAD but the result of the application process came with good and bad news at the same time. I had made it to the INSEAD Class of '16D but had lost my son as well.

In the midst of that financial and emotional crisis, my respect for INSEAD only increased when they not only accepted my request to defer my admission but also granted me 20% of my tuition fee as scholarship. From May ’15 until now, the admin and student support teams at INSEAD have helped and guided me at each and every step of the process.

I got in touch with the FL&C folks earlier this year who helped me complete my exit exam requirement before even my MBA starts in Jan ’17. I also had to take another 20% of tuition as loan, which I obtained quite conveniently from Prodigy (an initiative run by INSEAD alumni to lend low APR loans to prospective MBA students). In a nutshell, so far I have found INSEAD not only a great business school, ranked #1 by FT in 2016, but also a student-friendly place with high values.

The countdown until my Orientation Week starts at INSEAD is now nine days. My wife and I are very excited to start this new and auspicious chapter of our lives. Despite not having seen the campus even once, I am already friends with about 60 of my soon-to-be classmates. My two-year journey from not having a clue about INSEAD to going ALL-IN-SEAD has been an amazing experience and exposure. I would definitely be writing more as my INSEAD MBA experience continues, sharing my perspective and learnings. Until we connect next time, I wish you guys a happy Christmas and a new year :)!

Ahsan is currently a student at INSEAD MBA Class of December '17. Prior to INSEAD, he was based out of Bahrain working with Mondelez International as the Startup Lead for a greenfield initiative. He is an engineer and has worked previously with P&G for seven years in various functions within operations management.

Warming Up for the Coming INSEAD Life
MBA
Read the blog

629
Where Did It All Begin?
MBA
Read the blog