It's Insight - Not Money - That Makes the World Go Round

Meet two professors whose expertise informs the world of finance... and the students of INSEAD's Executive Master in Finance programme.

“Being invited to talk to Ben Bernanke and other directors of the US Federal Reserve is probably one of the highlights of my career,” says INSEAD Professor Antonio Fatas.

“But", he adds modestly, “I think they bring in academics regularly, just to save time reading all the research in depth.” Did his visit to the Fed change the world? “Probably not, but I’d like to think the three hours I spent with Bernanke and this team a couple of years ago helped them to understand the risks a little better.”

Antonio Fatas: from the Federal Reserve to the Executive Master in Finance

Professor Fatas is an eminent economist, who teaches the optional Macroeconomics course on the INSEAD Executive Master in Finance programme (EMFin). His research is mainly about central banks and fiscal policy. So what exactly was his expert advice to Bernanke?

He explains: “The thrust of my argument was that the current levels of government debt weren’t so high as to be dramatic. ”

And indeed, this seems to have been more or less the course of action taken by the US – unlike many other countries. Perhaps his influence was stronger than he makes out.

But why should EMFin students, who are all finance professionals, take the same interest in Professor Fatas’s research as a national policy maker?

“In times of economic stability, macroeconomics isn’t so crucial to banking or corporate finance,” he admits, “But in less stable economic conditions, such as today’s, the financial markets are dominated by economic news, rather than the health of specific companies. Now, more than ever, it’s essential for finance professionals to understand the context in which they operate.”

Ultimately, he insists, economics is not about prediction but building a framework to think about the future. “It’s not about predicting, but reducing uncertainty and estimating risk,” – a role that the INSEAD EMFin students, selected for their potential to become leaders in their industry, should identify with better than anyone.

Steven Monahan: on the cutting edge of accounting risk

“It’s funny you should mention risk,” says Professor Steven Monahan, Professor Fatas’s colleague from the school’s Accounting and Control area. “Because I think the paper I’ve just finished could have a significant impact on the way firms and investors evaluate the risk in future accounting numbers.”

The paper, which he wrote with two other INSEAD professors, is technical but Professor Monahan says the basic intuition is straightforward, and thus he plans to explain the methodology and its practical uses to EMFin participants. “To cut a long research story short,” he says, “until we wrote this paper, no one had thought of a way to reliably estimate the chance that future earnings would be in a certain range. It’s a highly novel empirical methodology that is also highly applicable.”

In the field of Corporate Finance, for example, INSEAD professors have outstanding credentials as consultants and industry advisors. “I really believe that we integrate theory and practice better than any other school out there,” says Professor Monahan, “And I’m not someone who likes to speak the language of marketing!”

He also enthuses about his EMFin students. “In other programmes, I have to keep showing that my subject is relevant,” he says. “But whether they’re from the corporate or the investment side, my EMFin students get it straight away.” Added to that, he claims, the first intake of the programme is intelligent, dynamic, interested, hard-working… and a joy to teach.

Perhaps it’s time to consider joining their ranks – and learn from the experts who advise the experts. 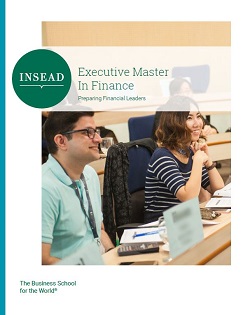