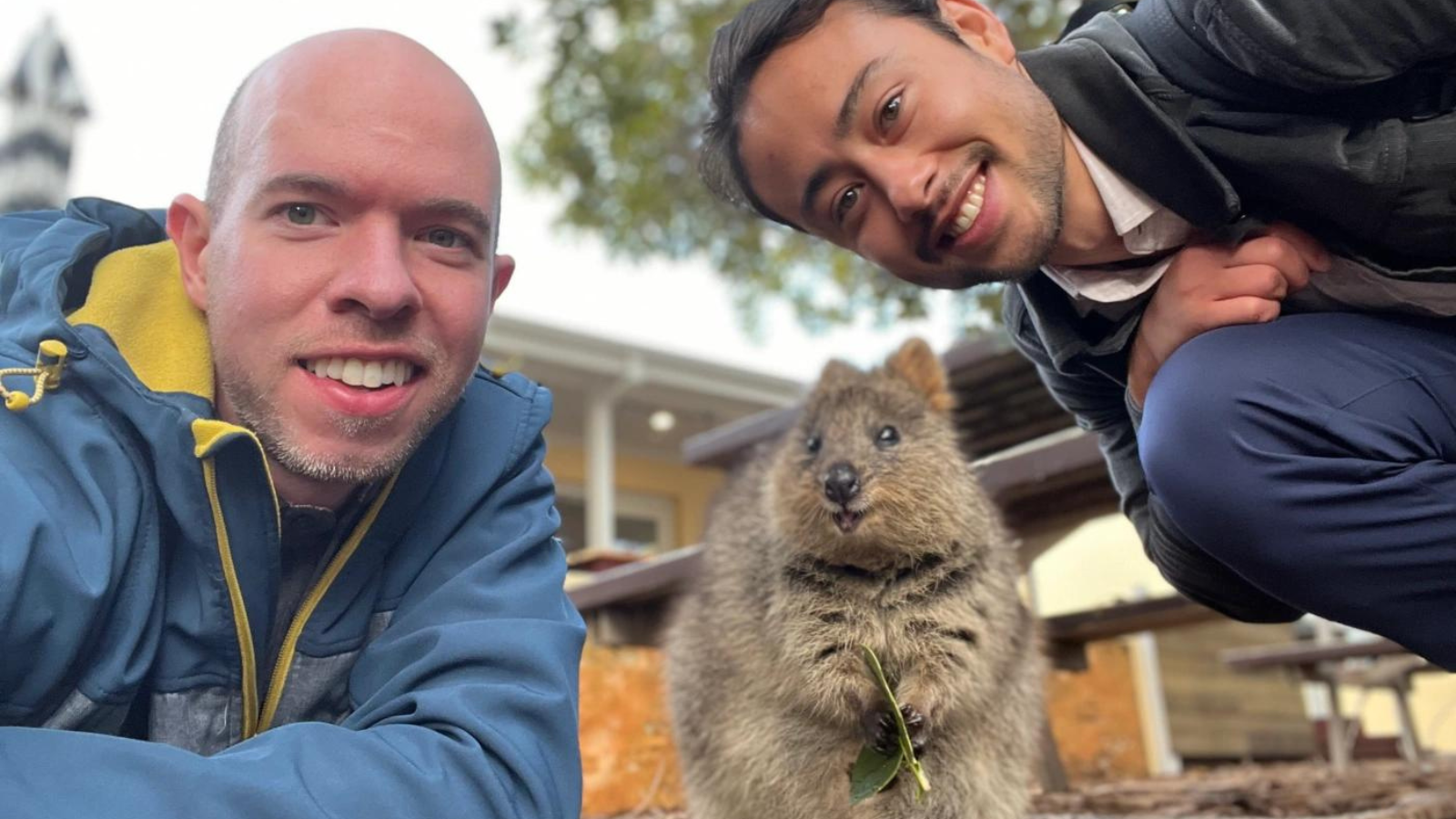 Matt and Ian have been mates since the start of INSEAD and both share an interest in tech and entrepreneurship. When we heard about SSUP early in the course, we were keen to get involved. While exploring options for our trip, a newly minted programme to head to Western Australia caught our attention.

This year, the WA Government and INSEAD signed an MOU to promote the state’s innovation capability.

The partnership was initiated by INSEAD alumnus Asheesh Malaney MBA'03J and is the start of a long-term collaboration between the Western Australian Government and INSEAD to bring students to the region to be immersed in the startup ecosystem and to study and report back on what they find.

The partnership also includes the development of a VR case study for INSEAD, collaborating with the mining industry to highlight virtual business environments and support automation and robotics in mining along with autonomous vehicle usage. Read more about it here!

Intrigued, we decided to do some research. We took a look at a map and discovered that the state covers a third of the country, dominated geographically by arid outback, but economically centred on Perth, which would be the fifth largest city in the US by population if it were based there.

WA is Australia’s only state to run a surplus (running in the billions!) and owes it to an economy dominated by the mining and natural resources industries.

This has helped it to have one of the highest GDP per capita in the world and budget and trade surpluses that support the rest of the country. Perth also boasts the title of the most isolated city in the world, with the next nearest city (Adelaide) located over 2,100km away.

We arranged a video call with Charlie Gunningham of Department of Jobs Tourism Science and Innovation (JTSI – pronounced “Jitsee”), who would be our main contact for the project.

He gave us some colour to our initial research and convinced us that WA was both a fun and vibrant place to visit and a state with a beating entrepreneurial heart. We were sold by Charlie’s energy and after some more research, decided to commit to spending our summer getting stuck into WA’s ecosystem.

We eagerly started planning our trip.

We reached out to lots of startups we found through desk research and through the INSEAD network, not quite knowing what reaction to expect. We were pleasantly surprised by the enthusiastic response to our requests and easily filled up our first week of meetings with both entrepreneurs and INSEAD alumni.

Lay of the land and themes of the trip

Landing in Perth, our first meeting was with INSEAD alum Sherman Lo MBA'12D who put us at ease and gave us the lay of the land. Our network snowballed from there as each person we met generously recommended others to talk to. Without exception, every person we met was friendly, opinionated (in a good way!) and willing to share the highs and lows of their entrepreneurial journeys and give candid opinions on the state of the WA ecosystem.

Some meetings scheduled for an hour lasted for several hours with one or two topping five hours, with conversations often blossoming into far reaching topics, from startups to sports to geopolitics.

Over the four weeks in WA, we built up a view of the ecosystem by meeting as many players as possible across the spectrum of startups.

We met founders who had just finished ideating, to much more established firms scaling internationally. We also met VCs, angel investors, accelerators and advisors, and government and non-profit entities. Across these dimensions we accessed a diverse range of views and backgrounds to build up a holistic picture of the ecosystem.

The funding environment is one of the most immediate and pressing topics that emerged from our conversations. The main active VC firm in the area is BetterLabs, which operates a A$23 million fund, while others are currently in fundraising mode, including Quokka Capital and Fund WA.

There is also significant wealth in WA from the resources industry around Perth. As a result, there is also some good family office and angel investing activity. However, beyond early-stage funding, there is a real financing gap. Serious Series A money and beyond can only be found by heading east or to Singapore / US which also offer attractive markets to startups, leading to some successful companies relocating to access capital and market.

Funding gaps are acknowledged by the government who are currently building an innovation strategy to ensure a range of funding sources (and other resources) are available to support entrepreneurs at each stage of their journey.

This is pertinent as resource industries are notoriously prone to boom and bust cycles. While WA is currently doing very well from resources, the government recognises the benefits of diversifying its economy by driving innovation to move to a more knowledge-based economy for long-term, sustainable growth.

While access to funding is important for WA, it also needs to be accompanied by a cultural shift. As a state that is used to the significant financial rewards of an economy and financial system structured around commodities, some common practices in WA are not conducive to the growth of the nascent start-up scene.

For example, some investors are used to investing for quick returns and pushing for fast IPOs stemming from experience of speculative investing into junior miners. This is not appropriate for most start-ups and leads many entrepreneurs to being cautious of taking angel investment.

Another prevalent cultural phenomenon is “tall poppy syndrome” where standout successes are “cut down”, rather than celebrated. We also learned of WA Inc, a political scandal in the 80s which led to large losses of public funds and distrust of government which led to more conservative approaches towards investment. While this occurred over 30 years ago, some of that conservatism remains today.

Despite such headwinds, there is a growing understanding of what start-ups require from all players involved. Many different networks have sprung up throughout WA in recent years to support, connect and educate those in the ecosystem for the benefit of all.

While WA felt like it was early on its journey along the “S curve” to becoming a mature ecosystem, it showed very promising signs of momentum.

The start-up scene in WA really started kicking off in the last 10 years, and many credit the jumpstart at the beginning to the creation of Spacecubed, a coworking space company that offers so much more through building of communities and innovation hubs, offering of growth programmes, and hosting of events. Spacecubed has helped to bring opportunities to many start-ups, innovators, accelerators, and investors.

One of the exciting sides of the ecosystem we were fortunate to get invited into was the network of female entrepreneurs. One of our early connections was Lacey Filipich of Money School, a successful entrepreneur and vocal member of the WA start-up ecosystem.

She brought us to an event at VentureX HQ, a network that amplifies opportunities for investing in women-led ventures and connects founders to the investor community.

We had several interesting meetings spawn from that early introduction. Check out some of our posts on the INSEAD SSUP LinkedIn page to learn more!

During our time in WA we were able to develop a deeper understanding of the relatively recent and raw history of repression that indigenous populations have suffered though conversations and museum visits (including to Boola Bardip – highly recommended for any visitors to Perth).

We were therefore delighted to get some time with Robert Barton of the Waalitj Hub, an initiative by the Waalitj Foundation to support Aboriginal and Torres Strait Islander people wanting to start, grow or sustain their businesses.

Despite launching a few weeks before lockdown hit in 2020, the hub has been a huge boon to community, now servicing an active caseload of 120 clients and helping Indigenous populations flourish and realise their entrepreneurial potential.

Having the opportunity to visit WA and be welcomed by the start-up ecosystem was a real privilege.

We learned a tremendous amount, met many inspiring people and were able to gain interesting perspectives, quite different from our home cultures of London and New York.

We also enjoyed exploring Perth and wider WA – visiting the quokkas on Rottnest Island and sampling some exceptional wine in Margaret River. We are proud to be the first cohort in what is set to be a long-term partnership between INSEAD and WA and look forward to seeing the ecosystem mature and following developments of the companies we met. Thank you to everyone who made us feel at home in their vibrant state!

Special thank you to Minister Stephen Dawson, Director of Innovation Charlie Gunningham, and esteemed INSEAD alum Asheesh Malaney and for making it all happen!

The Summer Start-Up Tour Programme (SSUP!) is an opportunity for students to discover and engage with the most exciting and innovative start-up hubs around the world. This 4-week programme provides a unique, immersive experience that can help shape your future as an entrepreneur. SSUP! has been the starting point for many successful entrepreneurship careers, including those of Sebastien Barthelemy, MBA’17D, Cristina Prat, MBA’19D, Sara Guaglio, MBA’19D, Dr. Ian Braithwaite, MBA’18D Kamakshi Malhotra, MBA’20D, Daniele Packard, MBA’20D, Renée Ros, MBA’19D. Both MBA and MIM students are welcome to participate. The SSUP! initiative is supported by by [email protected], the CDC, the Rudolf and Valeria Maag INSEAD Centre for Entrepreneurship, the Healthcare Management Initiative and HGIBS.

They Call Me Mr. Start Up
MBA
Read the blog

1846
Is Now the Best Time to Be an Entrepreneur? We Think So.
MBA
Read the blog